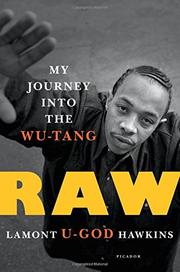 The Wu-Tang Clan made their mark through being unusual in their myth-inflected back story, a posse of distinct street-focused perspectives. Before that, “U-God” Hawkins absorbed the realities of urban poverty firsthand in a Park Hill housing project. “Only the pure of heart make it out of the ghetto,” writes the author. As a teenager, he ran a lucrative crack enterprise, learning about violence and survival and eventually serving prison time. “I was content with my small operation,” he writes, “making enough to get by and taking care of my peoples.” At the same time, he was developing rhymes with what evolved into the Wu-Tang core. Their genesis isn’t discussed until halfway through the book, and other members are sketched broadly beyond amusing anecdotes of hardscrabble early years. Hawkins suggests their success was marred by infighting and unequal emphasis on contributions by prominent members RZA, Method Man, and Ol’ Dirty Bastard, about whom the author notes, “If Dirty hadn’t died, I think the Wu would be in better standing.” Regarding his own solo project, he claims, “we couldn’t get the same support from the entire Clan the way [other members’] records had been supported.” By the end, Hawkins’ narrative becomes rancorous; regarding his lawsuit against RZA, he writes, “he got rich, but I still don’t know what I’m due.” By 2010, “the supergroup was splintering apart.” Hawkins notes even the notorious Wu-Tang “one copy” LP purchased by Martin Shkreli wasn’t really a legitimate project. The author writes in a casual style that will entertain fans of the group and its era, but the narrative becomes muddled and disingenuous. Hawkins brags about his own redemption and embrace of an underground values system termed “Supreme Mathematics,” yet he writes dismissively of barely provoked violent acts by Wu-Tang associates and himself.

A rambling and heartfelt account, vivid in its recollections of 1990s East Coast hip-hop.

ONE DAY IT'LL ALL MAKE SENSE
by Common
Nonfiction