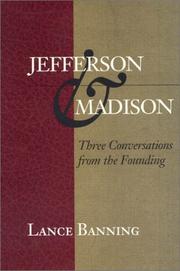 Three Conversations from the Founding

Drawing on the celebrated correspondence between Thomas Jefferson and James Madison about the newly adopted Constitution, Banning listens in on ``three of many conversations that occurred between two founders on matters of continuing concern.'' (See p. TKTK, The Republic of Letters, for the collected correspondence.) As US minister to France, Jefferson was absent from the US during the deliberations of the Constitutional Convention in 1787 and during the prolonged struggle in 1788 to ratify and establish the Constitution. However, Madison, Jefferson's friend and fellow Virginian, played a significant role during the convention. Banning (History/Univ. of Kentucky; The Jeffersonian Persuasion, not reviewed) shows that Jefferson objected to the lack of a declaration of essential rights in the Constitution, fearing that the newly powerful central government could develop into a despotic monster. Madison initially opposed adoption of such a declaration, arguing that, since the new federal government was one of limited powers, it was unnecessary to limit it with a declaration of rights—and that a bill of rights could prove dangerous in that it could be used to justify attempts to suppress rights not listed in the document. Of course, as Banning points out, Jefferson won that argument: On May 4, 1789, Madison announced in the House of Representatives that he would soon introduce a series of amendments to the infant Constitution. These amendments, which would become the Bill of Rights, were drafted and largely shepherded through the ratification process by Madison. Banning also presents the thoughts of the founders. Jefferson asserted that the public should not be burdened with debts of the previous generations, and even that legislatures should lack the power to bind future generations with indebtedness. Banning writes that what united the seemingly radical Jefferson and the more conservative Madison was a similar notion of ``public spirit,'' characterized by equal commitments to republican ideals and to democratic, majority decision making. A well-crafted work of history that not only gives insight into the lives and thought of the two men but also stimulates thought about the public institutions they helped to create.