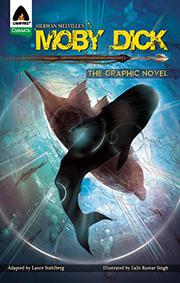 In this slender graphic adaptation of Melville’s magnum opus, Ishmael, Queequeg and the rest of the uniformly burly, steely-eyed whalers are strong presences in Singh’s art—at least until their pale, gargantuan nemesis shows up to scatter them and their ship as flotsam across the waves. Ahab, craggy features slashed by a broad scar, is properly oracular, too: “Toward you I roll, you all-destroying but unconquering whale. From hell’s heart I stab at you.” You can practically hear Gregory Peck’s voice. The small but clear lettering in dialogue balloons and infrequent captions is easy to read, much of the language echoes that of the original and, if the plot is reduced to a bare sketch, the art, at least, punches up the tale’s melodrama and psychological tensions. Though an also-ran next to the versions of comics legends Will Eisner (2001) and Bill Sienkiewicz (1990), it’s absorbing enough—and the biographical introduction and closing pages on whaling ships and sperm whales provide a nice veneer of historical context. (Graphic fiction. 11-13)