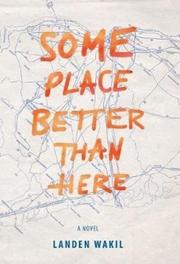 SOME PLACE BETTER THAN HERE

When Danny first sees Mary, she’s running away from her ex-boyfriend Tanner into the back room of the New Jersey grocery store where she works—screaming at the top of her lungs, imploring him to leave her alone. Mary’s loud outburst sets the tone for the rest of the novel, which follows the two teenagers’ eclectic, unusual relationship. The book is structured in acts, letting the momentum build, as it would in a play, until the final section. More specifically, the book is structured using alternating perspectives; as it oscillates between Danny’s and Mary’s points of view, it offers a complete, authentic, and objective narration. Danny is a fairly typical 17-year-old high schooler who loves music (though only music with lyrics, preferably from decades that preceded his birth), smells good, is a talented guitarist, and works at a car wash across the street from the grocery store where Mary works. When he meets her, he’s awestruck but a bit wary: “When my too dry lips peeled apart, I realized I had become that guy. Totally forgetting that this amazingly hot girl was just involved in a shouting match about ten seconds prior to my being captivated by her hotness.” Still, Danny musters the courage to ask her out—but it takes a little while. Mary, on the other hand, doesn’t come off as the most approachable girl for a boy like Danny. She’s an irritable 17-year-old who goes out to bars with her girlfriends, surrounds herself with people who call Danny a “faggot,” and struggles with a physically and verbally abusive father. The duo is an unlikely match—another case of opposites attracting.   Debut author Wakil fills the text with moments of pure teenage bliss in which readers will recognize their younger selves experiencing the excitement of love for the very first time. Similar to works like Stephen Chbosky’s 1999 debut novel, The Perks of Being a Wallflower, this book is a testament to the power of conviction, the results of perseverance, and a case study of small-town millennials from varying economic backgrounds. The author has a punchy, irreverent writing style: “So, as we drove through the swampy and winding road, where the crickets were louder than the music Danny played, my head fell back between the headrest and the door, and I let the wind blow back my hair.” With it, he effectively creates a narrative environment in which anything can happen, from stealing a boss’s Porsche to chasing down bullies on the freeway to helping friends cope with debilitating bouts of depression to navigating the changing functions of parent-child relationships. Danny and Mary are captivating, frustrating, and completely imperfect characters that are very much evocative of the current sociocultural climate. They also seem like products of the 1990s, and they drive into adulthood with familiar teenage uncertainties and doubts. Readers will willingly surrender themselves to this book and gain much from it.