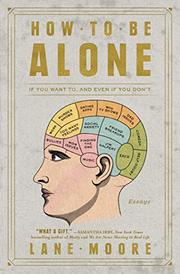 HOW TO BE ALONE

If You Want To, and Even If You Don't

One woman’s quest for companionship in a culture progressively geared toward isolation.

In her first book, about dealing with one’s own solitude, Moore—the Onion writer, former sex and relationships editor at Cosmopolitan, and creator of the comedy show Tinder Live!—doesn’t compile reams of statistics, comparative studies, or clinical evidence. Rather, she takes readers on a playful ride through her life, examining relationships and nonrelationships alike as she both actively engaged in and passively avoided assuaging that aching search for friendship and love. Swinging from the euphoria of newfound friendship to the despairing trenches of love lost, each chapter becomes a foray into universally themed experiences for women of all ages and sexual persuasions—e.g., “Please Just Be a Good Person So I Can Finally Be Someone Who Has Friends,” which details the adolescent exploits with her friends and the confusion of teen gender roles and intimacy between girls. In “I Liked Dating You Better in My Head,” Moore explores a long-term romance with a man that ended up unraveling into a textbook co-dependency in which the couple was in love with future possibilities rather than the empty reality of now. Moore’s fast-clip wit, hilarious allegories, and conversational prose knock down the uncomfortably sharp edges of facing aloneness. Comparing her own life to scientist Harry Harlow’s monkey love experiments, Moore teases, “I have always identified with the kind-of-dying monkeys who technically had food, but desperately wished they had softness and care too.” Later, in a brief manifesto of women’s romantic needs, she asks, “why did we stop wanting dinner and a movie and maybe flowers?....When did we start thinking that courtship was too time-consuming and everything romantic comedies waxed on about was just a dumb fairy-tale concept, instead of our expectations for romantic love? I’m tired of pretending I’m cool with whatevs. I’m tired of pretending that laziness can replace thoughtfulness and still be acceptable to me.”

An irreverent, candidly introspective exploration of toiling with loneliness that will leave readers feeling not so alone.