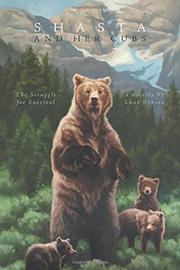 Shasta and Her Cubs

The Struggle for Survival

Inspired by the years he spent in Canada’s Kananaskis Provincial Park, Robson (The Prophecy, 2014, etc.) crafts an anthropomorphic story of a young grizzly named Shasta and her day-to-day struggles to raise her first litter of cubs.

Written in third-person with a focus on mother Shasta, this story of survival begins when her cubs—Kodiak (a strong male), Koda (a strong female), and Mato (a small, weak male)—are but a few days old. The tale continues into the cubs’ fourth year, when they will set out on their own. Shasta’s memories—such as her reasons for coupling with a majestic male named Ursus—are sprinkled throughout the narrative. Even though the bears are given human personalities, the book is intended for “a more mature nature enthusiast,” writes the author. Indeed, the attribution of human emotions to grizzlies makes the tone feel juvenile at times; for example, “Shasta smiled as she considered her choice of such a good den in which to give birth to her first cubs.” Nevertheless, Robson succeeds in realistically portraying the difficulties of grizzly survival—e.g., little Mato is attacked by an eagle—as well as the triumphs, as when Shasta manages to kill two elk for sustenance during a drought. Survival is paramount, and Shasta is determined to continue her bloodline. The narrative voice flows smoothly, and language is often poetic, as in a vivid description of Shasta’s smallest cub, Mato: “He would likely darken with time, but for now, his fur was the color of the tall blonde stalks of dry meadow grass that covered the ground after the snow melts and before the new green shoots emerged.” In fact, the adult vocabulary—shadows at dusk “had coalesced into the darkness of night”—is sometimes better suited for older teens and adults. A short discussion of basic grizzly behavior follows the story, as do footnotes, a nature glossary, and references for further reading.

A sweet, often poignant tale of survival that may spur interest in a magnificent species.