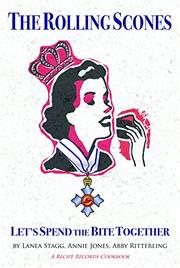 The music of the Rolling Stones forms the centerpiece of this cookbook.

The subtitle of this volume, “Let’s Spend the Bite Together,” is only the first of many culinary puns that season this eclectic collection of recipes with spicy, sometimes-groanworthy humor. From Paint It Black…Bean Hummus to Sympathy for the Devil’s Food Cake, the quirky work blends party food ideas with beguiling bits of trivia about the Stones’ songs and career. Cherry Oh Baby provides a recipe for cherry tomatoes stuffed with a blue cheese-horseradish mixture while noting the influence of reggae on the group when the song of the same name was produced. I Wanna Be Your Flan gives a basic version of the Spanish dessert paired with a comparison of the Stones and the Beatles that notes that the former’s rendition of the song “I Wanna Be Your Man” has elements of both bands’ styles. The recipes are not always inspired—Shake Your Chips, which consists of cream cheese, salsa, and some grated cheese baked in an oven, produces a dip that is both watery and gummy, and Rocks Off comprises just bourbon and Coke over ice. But Nanker Phelge, named for an early Stones pseudonym, and Jumpin’ Jack Mash are recipes for classic, British working-class dishes, which, though basic, may be new to American tastes and go well with the salty Stones repertoire. Nanker Phelge presents readers with an English pub staple: the “Ploughman’s Lunch,” which here includes cheese, cold meat, crusty bread (“and sometimes butter”), Branston pickle (or chutney), pickled or green onion (or both), and fruit or vegetable. Jumpin’ Jack Mash provides instructions for making a hearty meal featuring bangers (sausage), bacon, onions, and mashed potatoes. The fun facts about the band that Stagg (co-author: Recipe Records: A Culinary Tribute to the Beatles, 2013) and debut authors Jones and Ritterling supply are dependably entertaining and may offer something new to even die-hard fans.