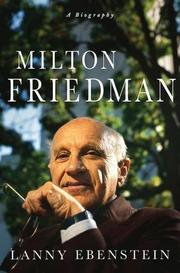 First post-mortem tribute to the most influential champion of the free market since Adam Smith.

Actually, Ebenstein (Economics and Political Theory/Univ. of California, Santa Barbara) refers to his subject throughout in the present tense, apparently not having had the opportunity to update his text since the economist’s death, on Nov. 16, 2006. Born in 1912, Milton Friedman was a puissant teacher and leader of the so-called Chicago School of economic theory. He also splendidly fit the modern job description of a public intellectual. With just a nod to his personal life, this tribute lauds Friedman as philosophical technician and theoretical guru of modern day laissez-faire. Perhaps, posits the author, he is the Karl Marx of libertarianism. Ebenstein quickly covers the economist’s early academic years and break for service as a WWII mathematician, before really getting going with Friedman’s return to the University of Chicago in 1946. He uses examples from scholarly writings to illustrate the economist’s evolution from possible early liberal tendencies to full-blown libertarianism. Readers will find summaries of Friedman’s thoughts on statistics, political economics, price theory and consumption function, savings and investing, supply and demand, permanent and transition income, money and banking. The influential 1963 text A Monetary History of the United States, 1867–1960 presented a revisionist view of the Great Depression, arguing that the New Deal was “the wrong cure for the wrong disease.” Regarding welfare, Friedman concluded, “government should not provide for the indigent, unemployed, elderly, sick, and disabled.” The free-market hero, with the help of wife Rose, wrote potently. He promoted his ideas in a PBS series. He supplanted John Maynard Keynes in the hearts of many theorists, won a Nobel and influenced generations with his powerful intellect. Ebenstein, clearly persuaded by the libertarian views of his revered subject, finds little fault with his hero in this dry hagiography executed with as much verve as an economist can muster.

An economic biography for economic theorists, particularly those on the right.