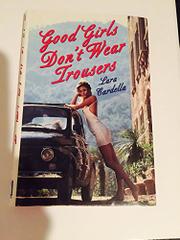 When she won a literary prize for this slim debut novel in 1989, the 19-year-old Cardella was shunned by her own Sicilian village, whose inhabitants claimed that the brutal, gossipy small- town culture she depicted was an inaccurate reflection of their own. As a prepubescent, narrator Anna dreams of wearing pants rather than the mandatory dress or skirt, and her hopes lead her through several different phases. In the first, she decides to be a nun, since she believes that nuns wear pants underneath their habits. When she discovers that this is untrue, she sets her sights on being a man and latches onto a male cousin in order to imitate him, only to find that she is permanently lacking the necessary equipment. Finally, after her mother's offhand remark that pants are ``for men, or sluts,'' she apprentices herself to Angelina, the daughter of an engineer and the loosest woman in her high school. Cardella's writing and Di Carcaci's translation are forthright and amiable, although the story sometimes slides toward a young-adult tone. But Anna's honesty pulls it into the adult realm. For example, she recognizes Angelina's disdain for her, as when she takes a bath at Angelina's house and fails to drain the tub afterwards, then notes that in her own impoverished household they are forced to reuse precious water. When an uncle spots Anna kissing a boy in public, her parents beat her into unconsciousness, then confine her to the house. Finally, they arrange for her to stay with her father's sister and her husband, Vincenzo, who had molested Anna when she was nine. There are glitches here and there: Cardella attempts to wrap things up too quickly and is hazy about when her novel indeed takes place. Perhaps an introduction would have given Amercian readers a better understanding of the closed Sicilian society. A remarkably open, if occasionally amateurish, representation of a place where ``women can be wives and mothers but they can never be people.''