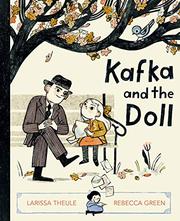 KAFKA AND THE DOLL

An imagining of an unlikely real-life episode in the life of absurdist Franz Kafka.

Theule follows the outline of the account: When Kafka meets an unhappy girl in a Berlin park in 1923 and learns her doll is lost, Kafka writes a series of letters from Soupsy, the doll, to Irma, the girl. The real letters and the girl’s identity have been lost to history; the invented letters describe a dazzling variety of adventures for Soupsy. Unfortunately, as the letters increase in excitement, Kafka’s health declines (he would die of tuberculosis in June 1924), and he must find a way to end Soupsy’s adventures in a positive way. In an author’s note, readers learn that Kafka chose to write that Soupsy was getting married. Theule instead opts to send the doll on an Antarctic expedition. Irma gets the message that she can do anything, and the final image shows her riding a camel, a copy of Metamorphosis peeking from a satchel. While kids may not care about Kafka, the short relationship between the writer and the little girl will keep their interest. Realizing that an adult can care so much about a child met in the park is empowering. The stylized illustrations, especially those set in the chilly Berlin fall, resemble woodcuts with a German expressionist look. The doll’s adventures look a little sweeter, with more red and blue added to the brown palette of the German scenes. (This book was reviewed digitally with 10.5-by-17-inch double-page spreads viewed at 23% of actual size.)

This reimagined telling has an engaging charm that rings true.