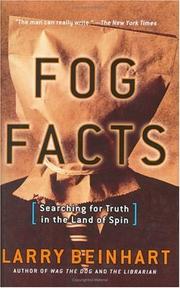 Searching for the Truth in the Land of Spin

Clearly, America is in serious trouble—it’s a coalition of the misinformed, and the fault lies largely with the media. The indictment this time is not against the perceived liberal press. Now it comes from the left, delivered by the irate author of the novel American Hero (1993), which was made into the 1997 film Wag the Dog.

The so-called War on Terror is a scam. The principles declared at Nuremberg are flouted. A State of the Union address assures profits for Halliburton and “tort reform” is designed to excuse corporate tortfeasors. Flimflam in Texas and shameless ballot theft in Florida have installed a government bent on secret, intentional self-destruction—all to benefit the wealthy and influential. The president and his henchmen, says Beinhart, are “chickenhawks” who send others to war, never fighting themselves. Dubya, believes the author, is not as dumb as he looks. How else could he have survived a history of feckless mismanagement without a scratch? The ruling class deems itself above the law. For example: Executive order 13303 declared certain judicial proceedings “null and void.” The facts—the fog facts—are out there, folks, but where is the reporting? Forget shock and awe; here are the stories that the national house organs, like the New York Times and the networks, missed covering in the miasma of fustian frequently offered as divinely inspired. (By the way, in case you thought the reverend Horatio Alger, at least, was a good guy, it is here revealed that he was a nasty pedophile.) Facts lifted from the fog—found too often, but perhaps inescapably, only on the ethereal Internet—provide telling talking points against the lies, fears and madness besetting the body politic.

Past Moyers and Dean, beyond Moore, is an assault against the administration, not for the faint of heart or those who miss The Alien and Sedition Act of yesteryear.