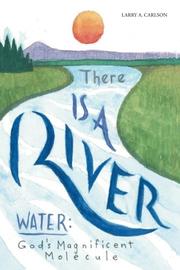 THERE IS A RIVER

A debut author delivers a walk through the Bible, set against an aquatic backdrop.

Carlson uses as a springboard the Old Testament verse “There is a river whose streams shall make glad the city of God,” and thus begins an unusual and meandering retelling of the Bible. Water plays a central, though not overwhelming, role in the author’s work, and he sees it as not only a life-giving resource throughout Scripture, but also as a potent symbol. Carlson points to “the powerful image of H2O—God’s never failing King of Chemistry and reigning biblical monarch of metaphors.” The author’s approach to the Bible is quite traditional in its theology, but highly unconventional in language and approach. One moment he is displaying poetic skill in his writing (“The psalmist’s thirst is quenched from no broken man-made container but from unlimited and unrestrained springs of eternal waters”), but at other times, he is making bad jokes about sacred topics (“Not daunted by Sarai’s geriatrics, He delivers on his promise, and she just plain delivers”). Carlson cannot go a full page without making a joke or a pun, and yet he can also treat his subject matter with the utmost respect. It is a maddening combination for readers. Likewise, he switches gears with little warning (such as turning from the warrior David to the nativity of Jesus). Yet even as readers will likely find Carlson’s approach to be jerky, unpredictable, and sometimes surprisingly irreverent, there is nevertheless a theologically sound inner core that holds up this otherwise erratic creation. As the author refers again and again to God as “the Singular, Eternal, Preexisting, and Uncreated Being,” it is clear that his respect for God transcends his often casual rhetoric. The water motif, ranging from descriptions of thirst and cleansing to settings of rivers and seas, lends added credibility to the author’s work.

Though certainly a mixed bag, this lively book remains a worthy source of traditional teachings of the Christian Scriptures.