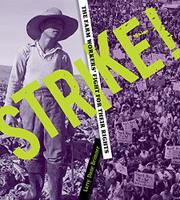 The Farm Workers' Fight for Their Rights

A skillful, compelling account of the complicated history of César Chávez and the farm workers movement, set in the context of the social and political tensions of the times.

“We used to own our slaves. Now we just rent them,” said a farmer in Harvest of Shame, a 1960 documentary about migrant workers. Union leader Chávez started picking produce as an adolescent and knew firsthand the brutal conditions farmworkers endured. Driven to change those conditions and raise wages, Chávez worked ceaselessly to organize California’s migrant workers into a union, which became the United Farm Workers. It successfully pioneered the use of boycotts to support strikes and adopted techniques such as fasting and protest marches from Gandhi and the civil rights movement. But hard-won victories were followed by setbacks at the hands of powerful farm owners and their Teamster allies. The UFW also suffered from increasing tension between Chávez and Filipino-American union leaders, while others criticized Chávez’s emphasis on Catholicism and his aversion to dissent. Brimner’s evenhanded, well-researched narrative uses apt quotes to convey a sense of the people, their actions and their emotions. Appropriately enough, green and purple accent the pages.

With an appealing design and many black-and-white photographs, this paints a vivid, detailed picture of an important labor movement and its controversial yet inspiring leader.