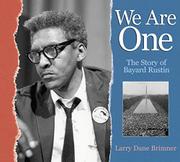 The Story of Bayard Rustin

Bayard Rustin was an important figure in the Civil Rights movement, yet he remains almost unknown to young readers. Rustin refused to give up his seat on a segregated bus several years before Rosa Parks’s defiance in Montgomery, organized the 1941 March on Washington, cancelled when key demands were met by President Roosevelt, and became an advisor to Martin Luther King, organizing the 1963 March on Washington, where King gave his “I Have A Dream” speech. An effective mix of major historical events and small, telling anecdotes, along with the attractive photo-essay format, make this a fascinating volume, informative and well written. An excellent author’s note matter-of-factly discusses Rustin’s homosexuality, his early involvement with the Young Communist League and his pacifism and imprisonment during World War II, factors that made him controversial and a potential liability to the movement. The bibliography is skimpy, with little to guide young readers to the many other fine books on the subject, but this is an excellent addition to that growing body of literature about the Civil Rights movement. (Nonfiction. 9+)