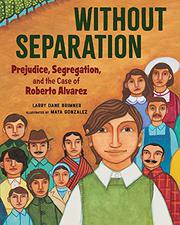 Prejudice, Segregation, and the Case of Roberto Alvarez

Separation is never equal. When the Lemon Grove School District’s board of trustees decided to expel every one of the 75 students who were of Mexican American descent in order to establish an all-White student body, the Lemon Grove Neighbor’s Committee—Comité de Vecinos de Lemon Grove—decided to take action. The Mexican consul in San Diego provided lawyers who filed on behalf of 12-year-old Roberto Alvarez in San Diego’s California Superior Court. Exploding the board of trustees’ assertion that the minority students were “backward and deficient,” Roberto himself, in fluent English, defended his position. This was the “first successfully fought school desegregation case in the United States.” On April 16, 1931, the decision was made public: “to immediately admit and receive…Roberto Alvarez, and all other pupils of Mexican parentage…without separation or segregation.” Brimner’s straightforward narrative follows Roberto Alvarez from his return to school after Christmas vacation only to be told he was no longer welcome to the day he was able to receive the same education as the White students. The substantial author’s note places this case in context with other desegregation cases in the U.S.—particularly in California. Gonzalez’s colorful and detailed mural-esque illustrations make the historical flavor of the times accessible.