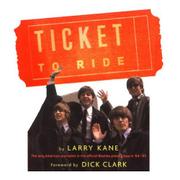 Inside the Beatles’ 1964 Tour that Changed the World

Radio newsman Kane may have been the only journalist to travel with the Beatles on all the stops of their 1964–65 tour, but this recounting offers little more than a chronology of screams and adulation.

Kane was 21 and a Florida radio reporter when he got the break to join the first Beatles tour of America, which he understands to have been “the greatest tour in rock-and-roll history . . . an event of great musical and social magnitude.” He writes that he approached the task with a degree of cynicism, as well as with anxiety and frustration, but he soon stands agog at the arena crowds—“rows and rows of hyperactivity”—and at the desperate acts fans would commit to get near the Fab Four: crawling through hotel air ducts, charging police officers, hoping one of the jellybeans they hurled at the musicians would hit home and thus achieve a form of contact. At times, Kane tries to put the Beatles within some sociological context—“a simmering youthful unrest and defiance against the establishment”—but mostly recounted here are the performers’ daring and absurd escapes from the concert hall, the sexual liaisons after the shows (“Getting women into the hotels required somebody with the power to do so. The Beatles couldn’t just wait around in the lobby for someone to show up!”), and Kane’s amazement that these were just four regular guys: “Their casual everyman’s view of life, coupled with their soulful music, endeared them to a whole generation.” What could have made all this hum—Kane’s unhindered access for interviews—instead provides much of its most inane material. “Kane: Hi, Ringo, how are you? Ringo: All right, Larry. How are you? Kane: Pretty good. A lot of magazines and portraits of you depict you as being very sad. You’re not a sad person, are you?”

Heartfelt, yet so threadbare of fresh material that it hardly merits even article-length treatment. (Photographs, 60-minute CD of interviews)