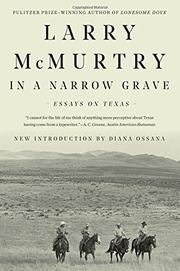 IN A NARROW GRAVE

A reissue of the 1968 volume of gently connected essays by the author of The Last Picture Show (1966) and myriad other notable works about the Southwest.

Surprisingly, McMurtry’s essays from a half-century ago possess enduring relevance. One of his themes is the end of the cowboy era and the exodus from the ranch to the city and suburbs. He writes at the outset that he wanted an elegiac tone, and he achieved it—witness his final clause in the book: “it can never be again.” Throughout, the author writes about the passing of the old ways: from the deaths of beloved older relatives (Texas was aswarm with McMurtrys) to the evanescence of the small towns to some of the depressing features he observes in Texas cities. San Antonio, he writes, is “the one truly lovely city in the state.” Younger readers may need to consult Google for some of the McMurtry’s references. An early essay, for example, deals with the filming of Hud (1963), based on his 1961 novel, Horseman, Pass By, and even the stars’ names, once iconic, have faded into history’s fog (except Paul Newman): Melvyn Douglas, Patricia Neal et al. It’s sometimes startling in these pages to read about the “new” presidency of Lyndon Johnson, the opening of the Astrodome, and other long-ago events. Occasionally, the 1968 McMurtry could be a little insensitive about how his words might sound 50 years later, as when, attending a fiddle event, he comments about how he saw no pretty women there—and he looked all day. These reservations aside, it is exciting to return to these essays and to hear McMurtry’s young, vibrant voice echoing throughout. One especially memorable essay records a drive he took around the entire state; through his eyes, we see the reality of his themes.

The energy of youth and intelligence and possibility thrum through these pages.