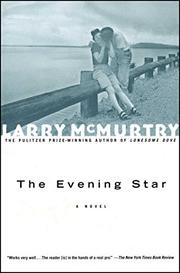 Part Two of the amorous adventures of Aurora Greenway, the high-spirited heroine of Terms of Endearment (1975). Aurora and her faithful maid/best-friend Rosie are pushing 70 ("late middle age"), living together in Aurora's Houston home. Aurora's daughter Emma, who died of cancer, left three kids, all emotional cripples, despite Aurora's efforts. Tommy is a murderer, doing time for shooting his ex-girlfriend; Teddy, sweet but fragile, lives with Jane (they met in a mental hospital) and their baby son Bump; Melanie, a college dropout, is pregnant by her ex-boyfriend. All Aurora's beaus are dead, except for General Hector Scott, her live-in lover; but the octogenarian General is now impotent, and Aurora's flirtation with Pascal, a diminutive Frenchman, has not sweetened his temper. Aurora decides they should go for therapy together, and she soon seduces their "seriously attractive" therapist, Jerry Bruckner—not for an affair but simply "to get laid," as she tells Jerry upfront. For Aurora, to her surprise, is consumed by lust. She and Hector have discovered the golden years are far more messy than serene; sex is Aurora's way of resisting "the downward curve of life" and keeping herself in the mainstream. Her fling with Jerry is good news for the reader, too, since it liberates Aurora from the brittle sitcom routines involving her, Rosie, Hector, and Pascal, and provides something of substance at the center. That aside, McMurtry's freshest writing is about the kids (Tommy in the joint, Melanie in Hollywood, Teddy in a menage a  trois with Jane's girlfriend), and his most portentous is about Aurora's final days, consoling herself with a brand-new great-grandson and the Brahms Requiem. McMurtry's celebration of the life force in an inhospitable world has just enough kick to keep you interested, but his uncertain handling (vaudeville or tragicomedy?) keeps you from full involvement; also, it's way too long.