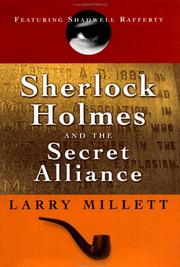 SHERLOCK HOLMES AND THE SECRET ALLIANCE

The city of Minneapolis is sprucing itself up for President William McKinley’s impending visit. So it’s a particularly inopportune time for a naked corpse to be found hanging from a tree outside Mayor Arthur Adams’s childhood home. Was barman-turned-millworker Michael O’Donnell indeed murdered by the Citizens Alliance for the Maintenance of Order and the Freedom of Labor, as a sign around his neck proclaimed? Why was his corpse displayed so publicly after his death? And who was the lady his camera had caught in flagrante with Randolph Hadley, chief enforcer of the Secret Alliance? O’Donnell’s former boss, tavern owner Majesty Burke, asks her colleague Shadwell Rafferty to investigate, and soon Rafferty and O’Donnell’s spirited sister Addie are up to their eyeballs in corrupt city officials, union organizers, outside agitators, treacherous Pinkerton operators, bribery and extortion cash, dead bodies, and the author’s specialty, a looming disaster. Meanwhile, Sherlock Holmes and Dr. Watson are cooling their heels in New York, restricted to telegrams and letters. Having given up any attempt to capture Watson’s authorial voice, Millett (Sherlock Holmes and the Rune Stone Mystery, 2000, etc.) uses instead the unlovely cadences of his journal to record that “H and I have spent the last few hours with SR & GWT, exchanging info & plotting strategy for what H believes will be ‘decisive day.’ ”

It’s not until the second half of this tangled, noisy, forgettable tale that Holmes and Watson turn up, and even then Holmes plays second fiddle to Rafferty. Expect the brawny saloonkeeper to get top billing next time.