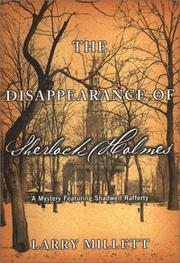 THE DISAPPEARANCE OF SHERLOCK HOLMES

A coded message sets off alarm bells in the steel-trap mind of Sherlock Holmes and prompts the sleuth to give chase, despite his strong suspicion that he and faithful Dr. Watson are being manipulated. Beautiful Elsie Cubitt, whom Holmes helped and fell in love with on a previous case, has disappeared after withdrawing £5,000 from her bank, implicating Chicago gangster Abe Slaney, a former Holmes adversary believed to have drowned after a daring prison escape. The trail begins with colorful spiritualist Madame DuBois, an enormous painted lady with masses of dyed black hair and a fake French accent. Despite her obvious inauthenticity, she’s been Elsie’s recent, frequent confidante, and she likewise disappears soon after Holmes interviews her. Complicating the search is a skillful Holmes impersonator who leaves false clues and petty-crime victims just two steps ahead of the heroes. Their odyssey takes them from London to Liverpool to New York City, where the titled plot development occurs in the middle of a fog in Greenwich Village, and ultimately to Chicago, Slaney’s bailiwick. Abetted by Irish barkeep and burgeoning detective Shadwell Rafferty (Sherlock Holmes and the Secret Alliance, 2001, etc.), Watson is left to find both Elsie and Holmes, himself a captive. Millett opts for texture over tension, with Watson’s traditional first-person entries counterpointed by the third-person narratives of the captive Elsie and sleuthing Holmes and the various villains ranged against them.

Another earnest homage to Doyle (with 25-plus pages of notes) that should appeal to hardcore fans but few others.