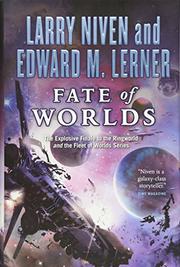 The next addition to the increasingly abstract and abstruse prequel to the Ringworld saga (Betrayer of Worlds, 2010, etc.).

The backdrop, in general terms, will be familiar to all series fans: To escape an explosion at the core of the galaxy, the cowardly Puppeteers launched a fleet of worlds, comprising all the suns and planets that make up their home empire, even though the wave front wouldn’t reach them for 10,000 years. The Ringworld itself, launched into hyperspace by supergenius Pak Protector Tunesmith, has vanished. Louis Wu, himself transformed into a human Protector, and his Puppeteer companion, Hindmost, also escaped from the Ringworld and now seek to reconnect with the political and military situation surrounding the Puppeteer fleet. Having resorted to some outrageous plot wrenching in the previous book to explain things up to this point, Niven and Lerner occupy more than half this volume recapping and examining, in smothering detail, what’s been going on from the very beginning of the series. Most readers will have been confused and will continue to be, since the authors must resort to yet more literary legerdemain to make it all even remotely feasible. Not the least of these issues is the presence of six or seven individual Puppeteers bearing the title “Hindmost,” the vegetarian species’ term for supreme leader. The payoff, and it’s a modest one, is a swirl of brinkmanship and struggle involving Puppeteers, humans from Earth and New Terra, catlike Kzinti, humanoid Pak, starfish group-intelligent Gw’oth and even toothy, three-eyed Trinocs—these latter apparently just so that fans of this particular species don’t feel slighted, since their presence has no bearing on anything whatsoever.

A book best appreciated by fans who relish the minutest details of the Ringworld universe.