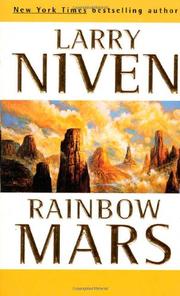 Almost 30 years ago, Niven (the splendid Destiny’s Road, 1997, etc.) wrote a handful of stories featuring Hanville Svetz of the Institute for Temporal Research. These reappear here as a sort of postscript, but the main attraction is a new full-length adventure. By the 31st century, Earth is polluted nearly to death, most species are extinct, and the office of UN Secretary-General has become hereditary. Under Waldemar the Tenth, Svetz roamed the past seeking wonderful animals to retrieve for Waldemar’s delectation. Waldemar the Eleventh, though, wants space travel and aliens—but the space program is nonexistent. So, what if the Martian canals observed by Lowell really were evidence of a dying civilization? Svetz and astronaut Miya Thorsven arrive on Mars in the year 1500. This Mars is inhabited, crisscrossed by canals, and sports a Beanstalk, a space elevator that seems to be a colossal space-going alien plant. The Martians, however, are mostly hostile and belong to a bewildering number of different species. Svetz and Miya must obtain Beanstalk seeds: if such a structure could be grown on Earth, it would yield cheap, painless access to space and its limitless resources. Several Martian species have already colonized this Beanstalk, which breaks free and sails off into space. When Svetz and Miya arrive at Earth a century later they watch the Beanstalk attach itself and grow. Mission accomplished? Well, not exactly. By the time they struggle back to the 31st century—not the same future they left—the Earth is dying, the Beanstalk having absorbed most of the planet’s water. Worse, the Beanstalk swarms with hostile Martians and is useless as a space elevator. Somehow, Svetz and Miya must change the past once again to remove the troublesome Beanstalk and find a way to make Mars live once more. A brilliantly conceived, funny, exciting, nail-biting, heart-warming jaunt through weird and wonderful histories that never were.