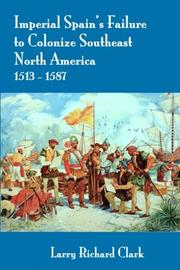 For all of Spain’s empire-building successes in New Spain (Mexico) and New Peru (South America), its experience in Southeast North America was altogether less fruitful. From Juan Ponce de León's initial foray in 1513 to the abandonment of Santa Elena, the capital of Spanish Florida, in 1587, Spain’s efforts to occupy and colonize the region were lamentable failures that helped pave the way for Britain to become the predominant colonial force. Why and how Spain failed so dismally in the Southeast is the focus of Clark’s (Tawodi, 2015, etc.) breezy, colorful history. “This convoluted story included all the elements of high drama with political intrigue, religion, untold riches, international conflict and, especially, the tragic consequences of Europe’s earliest contact with the indigenous peoples of the Americas,” he writes. The author covered some of this territory in his book The Last Conquistadors of Southeast North America (2015), but here, using a remarkable assortment of sources and anecdotes, he deftly broadens his scope to include the misadventures of Hernando de Soto, Friar Luis Cáncer de Balbastro, and Juan Pardo. Cáncer’s attempt to establish a religious colony in La Florida ended with him kneeling to pray before a small band of Native American warriors, one of whom unceremoniously clubbed him to death. The presidios constructed by Pardo along the La Florida frontier were largely destroyed by natives, with one Jesuit priest blaming the Spanish soldiers’ “lust for Indian women.” Clark convincingly attributes the Spanish malaise in the Southeast in large part to the stubborn resistance of the indigenous peoples, noting that, unlike the more centralized Inca and Aztec, they were “a collection of many independent tribes with skilled warriors who would eagerly fight any invader into their homeland.” The Spanish also made the mistake of failing to sufficiently populate the region with colonists or adequately defend it with soldiers and, at critical moments, were distracted by other problems within their vast empire. Ultimately, of course, other invaders were able to obliterate the natives, leaving, as Clark wistfully notes in his detailed and absorbing book, only “300 Apalachee descendants in Louisiana…as the only members of any Florida indigenous tribe.”

The author uses an impressive array of sources to show how the stubborn resistance of Native Americans thwarted Spanish colonizers.