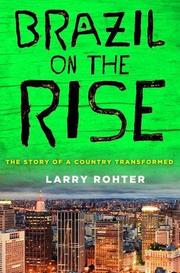 BRAZIL ON THE RISE

The Story of a Country Transformed

A timely, readable study of Brazil’s history and current prospects.

Having traveled and lived in the country since the early ’70s, New York Times culture reporter Rohter has found that Brazil’s motto of “Order and Progress”—once denigrated as “Disorder and Backwardness”—has finally come to fruition. From a country where 80 percent of the population once lived in the countryside, the other 20 in the cities, the percentages are now reversed, and Brazil’s current 200 million inhabitants make up the fifth most populous country in the world. The country also has a land area greater than the continental United States. Self-sufficient in oil and gas, the world’s foremost manufacturer of ethanol, thanks to the country’s forward-thinking use of the abundantly renewable sugarcane, and with the staggering natural resources of the Amazon at its disposal—to disastrous ecological results—Brazil is indeed a global force to be reckoned with. From the succession of military dictatorships of the late ’60s to the ’70s, accompanied by the so-called economic Brazilian Miracle of the early ’70s, to the slide into the comfortable democracy of charismatic leaders Fernando Henrique Cardoso and Luiz Inácio Lula da Silva—the latter has been the presiding president since 2002—the country has achieved political stability and huge economic growth during the last 15 years. Rohter looks at the rich makeup of the country, starting with a (too) cursory history of the Portuguese arrival in 1500, who displaced but did not annihilate the indigenous tribes; the curse of the importation of African slaves (slavery wasn’t abolished until the 1880s); and the racial mixing that came to define Brazilian culture—curiously, the “white elite” endorsed the “whitening” of the black population for the purposes of superior “ethnic composition” well up to 1945. The author also offers an evenhanded consideration of some of Brazil’s most celebrated artifacts, including Carnaval, soccer and samba. Overall, he depicts a tolerant people intent on being taken seriously.

With the recent granting of the 2016 Summer Olympics to Rio de Janeiro, Rohter’s accomplished overview proves a solid brush-up.