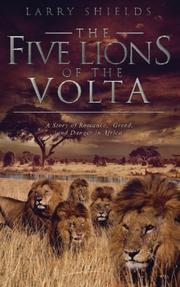 The Five Lions of the Volta

A Story of Romance, Greed, and Danger in Africa

Bioengineer Allan Sinclair is excited to tell his girlfriend, Lisa Sharpe, about a West African nutmeg plant, Kombo, that may offer a breakthrough for treating Alzheimer’s and Parkinson’s diseases. Lisa relays this information to her venture-capital firm’s boss, Scott Sherman, whose mother has Alzheimer’s. He finds out that his former Cornell University colleague, professor John Stamen, has the patent on Kombo, so Scott gets funding from pharmaceutical company Wyzer and travels to Ghana with John. They’re promptly kidnapped by Richard Akromah, a rebel whose armed men are running protection rackets on illegal mining operations. Lisa and Scott’s best friend, journalist Mark Halper, helps with the ransom payment, but Richard, seeking amnesty from a 50-year-old murder, ultimately becomes their partner, helping to collect Kombo for a profit. Unfortunately, Richard has shady associates in his past. One is gun smuggler Sergei Andreyavich, who set up Richard’s bank account 15 years before and isn’t happy about recent transactions; he assumes correctly that Richard’s now in business with someone in the United States. He and his Russian pals are willing to align themselves with terrorists in order to get the money they feel Richard owes them. Although this book contains thriller components, such as the ever present Russian threat, its high-speed resolutions curtail the suspense; a hostage situation, for example, is resolved in the course of a relatively short scene. Nevertheless, Shields excels at the surprisingly riveting financial aspects; Richard may be a criminal, but Scott is equally ruthless in setting up shop with John, despite what it does to Lisa’s relationship with Allan. Politically, the story stays middle-of-the-road. It’s indisputable that Ghana has been victimized (or “raped,” as a local doctor puts it) by foreign companies for its natural resources, but big money is also shown to be a necessity to get projects off the ground; for example, Allan, on his own and without steady revenue, makes no headway. Shields rounds out his story with melodrama, such as when a distraught Lisa continually checks to see if Allan has left her a message.

The villains have little impact in this tale, but its white-collar plot is continually fascinating.