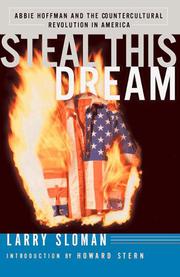 Abbie Hoffman and the Counterculture Revolution Against America

Abbie Hoffman, cut and pasted—and so made whole. This Edie-style oral biography by Howard Stern collaborator Sloman (also the author of Thin Ice, not reviewed, etc.) consists of hundreds of quotations from dozens of interviewees, including Hoffman, who died in 1989. The assembled cast includes Timothy Leary, Allen Ginsberg, William Kunstler, Tom Hayden, Daniel Ellsberg, G. Gordon Liddy, Jerry Rubin, Grace Slick, and Hoffman’s siblings, parents, wives, and children. Hoffman, a Worcester, Mass., native and sexually experienced Brandeis student in the 1950s went on to become an organizer in Mississippi for the Student Non-violent Coordinating Committee. Later, in San Francisco’s Haight-Ashbury, he fell in with the Diggers, a group of actors-turned-activists, soon thereafter gaining his first major exposure with future Yippies co-leader Jerry Rubin at a photo-op money-burning at the New York Stock Exchange in 1967. As Art Goldberg puts it, after his trial for his role in the 1968 Chicago Democratic convention riots, Hoffman was more than a radical, he was a media celebrity. Later, he befriended John Lennon and Yoko Ono, became an outlaw and a hustler, and drifted into drug-dealing. Busted in the ’70s, he went underground for much of the decade. Sloman’s choice of the oral biography technique, on one level an exceedingly lazy, and sometimes confusing, approach (the reader is given zero context for most speakers or their comments), comes to seem an eminently reasonable device for writing the life of the radical activist and author whose own literary works tended to aspire toward “anti-books.— Readers will feel for Hoffman’s son, America, who after his father’s death wished he could just talk to Abbie, man to man. And Ginsberg neatly analyzes the subject’s legacy when he says Hoffman’s idea for social revolution was premature, noting that its fruition came in eastern Europe 20 years later. Through sometimes contradictory voices and fractured perspectives, Hoffman as a person, with his moral strength and personal vulnerabilities, slowly—and surprisingly—comes into a sort of focus. (40 b&w photos) (Author tour)