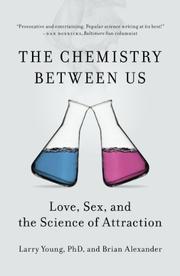 THE CHEMISTRY BETWEEN US

Love, Sex, and the Science of Attraction

A pop-science analysis of the complex brain chemicals behind lust and love.

Why do we drunk-dial our exes? Why do strippers make more money when they are ovulating? Why do fools fall in love? These are some of the questions explored by Young (Psychiatry/Emory Univ.) and journalist Alexander (America Unzipped: In Search of Sex and Satisfaction, 2008). The authors argue that the causes are related to the potent, sometimes irresistible, chemical cocktails our bodies produce. In interviews with scientists of all stripes (psychiatrists, neuroscientists, researchers), Young and Alexander examine their ideas and how they pertain to us, often illuminating their explanations with funny, and sometimes raunchy, anecdotes. One researcher studying leeches described the male leech as “the icky guy in the bar hitting on every female,” while a neuroscientist studying the links between smell and sex in rats joked that a female rat became “the major party girl” during an experiment. Some animal lovers may be disturbed by the occasionally flippant tone describing some gruesome lab experiments—e.g., “it turned out shooting electricity into cat brains just gets you angry cats.” The authors’ analysis of the differences between male and female brains suffers from this glib attitude as well, but the book is sure to hook even casual science readers with its subject, because, as Young and Alexander point out, “the combination of erotic desire and the love it leads to may be the most powerful force on earth.”

An entertaining overview of the science of physical attraction.