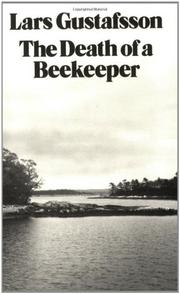 THE DEATH OF A BEEKEEPER

Lars Westin, is 40, divorced, a Swedish schoolteacher who retired early to live alone, raise bees, and probably die: when a letter arrives from the hospital giving him the results of his biopsy, he agonizes over it and finally burns it, unread. Why? Well, he has decided to face his fate as a pure empiricist, discovering what death is like (if that's in fact what he's in store for) step by unknowable step . . . while, at the same time, he reconstructs the events of his short, withdrawn life. When neighbor boys visit, he tells them a sumptuous horror story of his own authoring. He tends to his bees unsentimentally. He remembers an incident in the past when his ex-wife and ex-mistress met in full mutual knowledge--and, surprisingly, became friends. But mostly Westin records, in notebooks, the open-and-shut of his awareness: of pain, of God, of mystery. The novel, in this aspect, somewhat resembles Max Frisch's diamond-like Man in the Holocene. But, unlike Frisch, Gustafsson chiefly ends up delivering homiletics--a wearying style, even if some of the musings are cool and glassy: ""Deep within, every human being hoards a pitch-black riddle. The darkness of the iris is nothing other than the starless night, the darkness deep in the eye nothing other than the darkness of the universe."" So, though this is a thoughtful, intermittently affecting import, it's ultimately under-dramatized and overly self-conscious in its dispensing of wisdom.