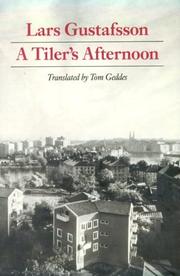 Swedish writer Gustafsson (Bernard Foy's Third Castling, 1988, etc.) here displays his Beckettian wares in a slender tale about a day in the life of a hard-working melancholic tiler. Torsteen Bergman, at 65, lives in Upsala, Sweden. He is called to a suburban villa for some work, and he works furiously—but by the end of the story, he is suppressing ``the realization that he had worked meaninglessly all day long at the wrong address.'' In between, Gustafsson milks many of the metaphoric possibilities of such a fable, occasionally with dark wit and an original philosophical bent. Bergman's mood changes from episode to episode: sometimes ``The world was all around him, and nothing in that world was really his''; at other times, he ``had the feeling of being a fairly contented fly moving up a wall.'' He works, reminisces, and daydreams, wondering about Sophie K., the tenant of an upstairs flat in the building in which he works, or conversing with fellow worker Stiggsy, or chasing after lost soul Seija (``She too was someone who had learned the rules''). Such moments make up for the lack of real plot. Here, for example, Bergman listens to the wireless: ``The wireless was a sort of counter-balance to the spiritual stuff that Mother went in for, the Evangelical Society and revivalist meetings and auctioning parcels for the chapel.'' The novel is sprinkled with enough such tidbits to make it an effectively bittersweet elegy. If it's not the dazzling chess game that Gustafsson has sometimes pulled off in the past, it's at least an appetizer with some real philosophical meat between the covers.