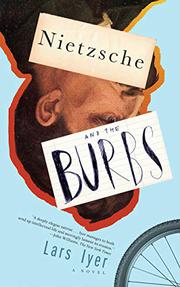 NIETZSCHE AND THE BURBS

A group of prep schoolers reckon with their ennui thanks to doom metal and a new classmate nicknamed after a famous nihilist.

Iyer has found a niche in seriocomic fiction about very serious philosophers: Wittgenstein Jr (2014) was a funny campus novel about logic, and this follow-up is a funny campus novel about despair. At its center is a group of students in Wokingham, 20 miles away from London, eager to finish classes and move on with their lives. But as their final semester begins, a new arrival, kicked out of his previous school under vague circumstances, at once unsettles their relationships and sharpens their cynicism. The new boy scribbles “NIHILISM” in his notebook, is prone to dark and gnomic pronouncements in class (“All things die in time”), and maintains a blog musing on the meaning(lessness) of suburbia (“Nothing will happen here….Unless the voiding of time is itself an event”). His dour temperament quickly earns him the nickname Nietzsche. (We never learn his real name.) The clique soon welcomes him at school and, later, at band practice, where they’re laboring on droning, sludgy rock that evokes their angst. Iyer neatly captures the way Nietzsche’s philosophy of the eternal return is a perfect fit for cynical teenagers who are sure it’s all been done, but Iyer also wants to explore how frantic teenage emotions challenge their assurances; suicide, love, sex, and self-destructive instincts all figure in the plot. As for comedy, Iyer has a knack for the one-upping banter that demonstrates maturity and insecurity at the same time. The cycles of hope-despair-repeat among the characters get repetitive, but credit Iyer for thinking big: That little garage band is determined to “start a new society” and be a “clue to a new way of life.”