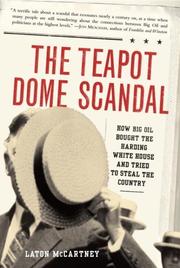 If corruption is what you want, put someone with strong ties to the oil industry in the White House.

So we learn from business journalist McCartney (Across the Great Divide: Robert Stuart and the Discovery of the Oregon Trail, 2004, etc.) in this lucid account of the Teapot Dome scandal. At its root was Warren G. Harding, the Ohio senator who was a 40-1 shot to gain the Republican nomination for the presidency for 1920 until he secured the backing of Jake Hamon, Harry F. Sinclair, Edward Doheny and other oil titans. The trade-off was that Hamon was to become secretary of the interior and be given control of the Teapot Dome oil field in Wyoming, “an oil supply potentially worth several hundred million dollars—1920 dollars—a bonanza so rich that it was almost beyond comprehension.” Hamon’s wife shot and killed him before the deal could go through, but before he died Hamon sent a sealed note to Harding with orders to “get some of his friends taken care of.” The oilmen got their way with a longtime New Mexico senator named Albert Fall, hard-drinking and murderous, who had fallen on hard times and seemed in danger of losing his huge ranch holdings. No sooner was Fall installed than his money problems disappeared, the dollars flowing into his bank accounts and those of other prominent Republicans as the oil flowed out of Teapot Dome. By way of thanks, Sinclair gained access to two million barrels of public-domain oil per year, on which Harding signed off in a letter to Fall: “I am confident you have adopted the correct policy and will carry it through in a way altogether to be approved.” Of course, when all this backdoor dealing was exposed, approval was not forthcoming. Sinclair thundered that he was too rich to be jailed. He was wrong, but many others walked.

A probing study of a scandal that spread even deeper than the standard histories claim—and one that has plenty of lessons for today.