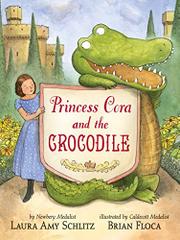 PRINCESS CORA AND THE CROCODILE

Princess Cora, tired of her young life as a queen-in-training, asks her fairy godmother for a pet—with unexpected results.

When Princess Cora was born, the King and Queen (both white, like their daughter) exclaim over her perfection. But the realization that Cora will someday be queen turns their delight into an obsessive diligence in training Cora in dull topics punctuated by tedious exercise. Add the three-baths-a-day regime that her nanny (also white) insists on, and Cora is now one unhappy princess. Denied a pet dog, Cora writes an appeal to her fairy godmother, and the next morning finds a box at the foot of her bed containing a large crocodile. Schlitz’s dry humor is on gleeful display as the crocodile, switching places with Cora (so she can have a day off), evens the score on her behalf with the King, Queen, and nanny. The crocodile’s antics are juxtaposed against Cora’s pastoral day and enhanced by Floca’s ink, watercolor, and gouache illustrations, which superbly amplify the story’s emotional arc. All ends happily. And the crocodile? He may or may not be living in the lily pond, but Princess Cora tosses in cream puffs (the croc’s favorite thing besides chewing on people) whenever she walks her new pet dog, just in case he is.

A clever tale packed with wry wit and charming illustrations.