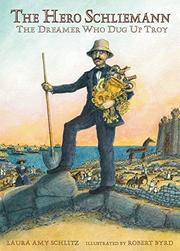 The Dreamer Who Dug for Troy

The charismatic millionaire who uncovered the fabled city of Troy receives here an admiring and affectionate, if not completely heroic treatment. As depicted in this offering, Schliemann was an almost completely self-made man: He struck out on his own as a young man and parlayed a gift for languages and a knack for business into a fortune, and then used that fortune to fund his archaeological pursuits, later writing a highly embroidered autobiography recording his exploits. Schlitz’s chatty text is frank with the reader about the difficulties of parsing fact from Schliemann’s fiction, developing her protagonist as a man who craved the recognition afforded the heroes of the epics. It is equally frank about the destruction his enthusiasm wrought on the remains of Troy, while at the same time according him the credit due the man who believed in its reality despite scholarly skepticism. Byrd’s wry illustrations match the breeziness of the text and add verve to the whole. While many readers will have little familiarity with The Iliad, they will nevertheless enjoy this portrait of a determined, if flawed, genius. (Biography. 9-13)