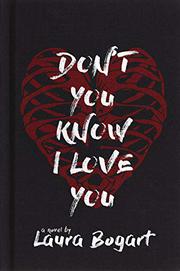 DON'T YOU KNOW I LOVE YOU

An accident sends a young woman back to her broken home in this debut novel.

Angelina Moltisanti went to college intending never to return to her parents in Baltimore. Just weeks after graduation, however, she’s in a car crash that shatters her left hand and wrist and her hopes of becoming a full-time artist. With no other options, she and her recently adopted dog, Valentina, return home to live with her violent father and passive mother. Her father, Jack, becomes obsessed with getting Angelina a large settlement for her arm while her mother, Marie, just wants her to be close again and perhaps to make a friend, something Angelina has never been good at. In low spirits, Angelina takes a part-time job as an assistant at the construction firm where her father works and starts spending time with Janet, a co-worker of her mother’s at Belle's Beauty Boutique who's Angelina’s age and a breath of fresh air in her life. Angelina struggles with the specter of trauma that haunts her home life, her attempts to get back into her art, and her burgeoning relationship with Janet, the stress threatening to overwhelm her. With her relationship with her father still volatile, it’s only a matter of time before it all catches fire. Bogart manages to thread the ghost of past violence into every scene so that when things are finally explained, there is no shock but only understanding. Every character is deeply flawed but written with compassion, even Jack. The book is narrated in a close third-person perspective that rotates among Angelina, Marie, and Jack, so the reader understands where they are coming from even if it’s hard to reckon with their choices. Bogart’s prose is exceedingly thoughtful, and the cycle of abuse is deftly explored, though it may touch too close to home for some readers.

A well-crafted tale of domestic abuse and recovery.