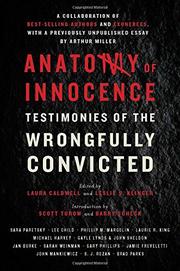 Testimonies of the Wrongfully Convicted

In the past three decades, books about wrongful convictions have become so numerous that they form their own genre. The advent of DNA testing for law enforcement purposes validated the previously discredited statement that American prisons are filled with innocent inmates while the actual perpetrators remain unpunished. Few of the books, however, match this skillful anthology, assembled by Life After Innocence founder Caldwell (The Dog Park, 2014, etc.) and Edgar Award–winning mystery editor Klinger (editor: In the Shadow of Edgar Allan Poe: Classic Tales of Horror, 1816-1914, 2015, etc.), in which exonerated individuals tell their stories to high-profile authors, most of them known for their fast-paced crime novels. While the names of the exonerees may be unfamiliar to general readers, the names of the authors are better known: Sara Paretsky, Lee Child, Laurie King, and more. Scott Turow and Barry Scheck provide the introduction. Each of the 15 chapters is worthy. Perhaps the chapter combining the highest level of storytelling with the most gut-wrenching detail is Brad Parks’ account of Illinois exoneree Michael Evans, wrongfully convicted of the sexual assault and murder of a 9-year-old girl; he served 26 years in prison for a crime he didn’t commit. Each chapter focuses on a specific aspect involved in these wrongful convictions. Parks’ account focuses on the jurors who reached the wrong decision, including the chairwoman of the jury, who felt all along that Evans was innocent. Other chapters emphasize dirty cops, craven prosecutors, flawed forensic evidence, mistaken eyewitness testimony, lying jailhouse snitches, noncompassionate judges, and more. One across-the-board theme is the hell of serving prison time while innocent, with seemingly no way out.

A searing, unforgettable anthology, with valuable insights provided at the end of each chapter by the editors.