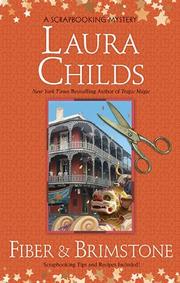 Killing in the Big Easy is dead easy.

While Carmela, owner of a scrapbooking shop, and her best pal Ava, proprietor of a voodoo-products emporium, put the finishing touches on a giant monster head to be worn during New Orleans’s annual Halloween parade, Bret Fowler is busy in another part of the float workshop getting fatally gored by the horns of a huge Minotaur puppet. Among those who want him dead are his business partner, who may have had a hand in Fowler’s Ponzi schemes; antiques maven and float designer Jekyl Hardy, who fought with him just prior to his demise; and Fowler’s trashy wife, who was colluding with another float designer on the history of New Orleans mayhem (and maybe more intimate matters as well). To the dismay of her boyfriend, homicide cop Edgar Babcock, Carmela enlists Ava, and the duo take up sleuthing. Their detective work is interrupted by dishing out scrapbooking advice; fixing their hair, makeup and wardrobe for a Halloween ball; touring a winery, where they’re chased through the Honey Island Swamp; searching for clues in a cemetery, where someone follows them; and dealing with an ex-husband, his argumentative sister and a new beau.