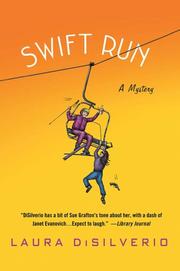 Odd-couple female investigators take on an equally odd case when they’re hired to look into the disappearance of the man who used to be married to one of them.

The convoluted tale of how Georgia “Gigi” Goldman ended up an employee of her ex- husband’s paramour is rooted in Charlie Swift’s fanny. Way back when, Charlie founded Swift Investigations with silent partner Les Goldman. When good-for-nothing Les ran off to Costa Rica with home-wrecker Heather-Anne, he left Gigi with a pile of nothing but the partnership in Swift. The most recent of the twosome’s adventures (Swift Edge, 2011, etc.) has left Charlie recovering from a bullet in the bottom. The pain in the butt doesn’t bother Charlie half as much as having Gigi in charge, especially when Gigi announces that Heather-Anne has hired them to investigate the whereabouts of one Les Goldman—quite an ironic turn of events, as Gigi clearly wasn’t keeping very close track of him during their marriage. Though Gigi’s certain she won’t be buying whatever Les is peddling if she does run into him again, she thinks her two charming children, brat Kendall and taciturn Dexter, are entitled to a return address for their child support, should Les ever get around to paying it.

Though the action grinds to a painful halt when Charlie pairs off with her potential love interests, anything can happen when Gigi’s at the helm.