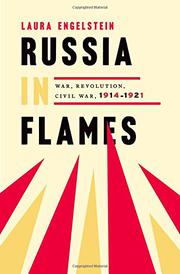 A simultaneously sweeping and focused history of the Bolshevik Revolution as a brutal co-opting of the legitimate democratic groundswell.

On the 100th anniversary of Lenin’s 1917 coup, Engelstein (Emerita, Russian History/Yale Univ.; Slavophile Empire: Imperial Russia’s Illiberal Path, 2009, etc.) concentrates on the ferocious state-building of the Bolsheviks, which allowed them to assume power through civil war, social control, and economic collapse, defeating the counterrevolution and establishing a top-down socialist state. The author revisits the Revolution of 1905 that shook the Russian Empire “from stem to stern” and first provided the model for the 1917 February Revolution. The Bolshevik coup of the duly elected provisional government brought on a savage four-year civil war that Engelstein asserts was “implicit in the revolution from the beginning.” Taking Russia out of World War I and gambling instead on the sparking of worldwide revolution fractured the opposition: “men versus officers, peasants versus landowners, workers versus factor owners, poor versus rich, drunk versus sober.” The Bolsheviks exploited the divisions rather than contain them, and what Engelstein sees as the legitimate “procedures of democratic life,” which were reflected in the many committees and conferences—she notes that a third of the population, about 50 million people, voted for the Constituent Assembly—could, by the dominant Bolshevik party, “be dispensed with, or refashioned as instruments of rule.” Moreover, the Cheka, the police-state ancestor to the KGB, was put in place within weeks after the October Revolution, instigating the Red Terror, which was, as one official noted, “the rational direction of the punishing arm of the revolutionary proletariat.” Engelstein astutely and methodically examines the unquiet regions in turn, from Finland to the Baltics to Ukraine to central Asia to Poland. Crushing the rebellion of the Kronstadt sailors in 1921 was just the beginning of the revolution’s turning against itself.