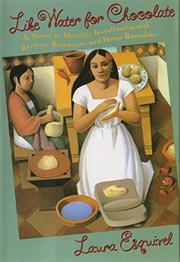 A first novel (``the number one bestseller in Mexico in 1990'')—liberally sprinkled with recipes and homemade remedies—from screenwriter Esquivel.

Set in turn-of-the-century Mexico, it tells the romantic tale of Tita De La Garza, the youngest of Mama Elena's three daughters, whose fate, dictated by family tradition, is to remain single so that she can take care of her mother in her old age. Tita has grown up under the tutelage of the spinster cook Nacha and has learned all the family recipes and remedies. When Pedro, Tita's admirer, asks for Tita's hand in marriage, her mother refuses permission, offering instead Tita's older sister, Rosaura. Pedro accepts, thinking it will be a way to stay close to his one true love. But Tita doesn't know his thinking and, crushed by what she sees as betrayal, she must make the wedding cake. Crying as she bakes, her tears mingle with the ingredients and unleash a wave of longing in everyone who eats a piece. It is just the beginning of the realization that Tita has special talents, both in the kitchen and beyond. As we witness the nurturing Tita's struggle to be true both to family tradition and to her own heart, we are steeped in elaborate recipes for dishes such as turkey mole with almonds and sesame seeds or quail with rose petals, in medicinal concoctions for ailments such as bad breath and gas, and in instructions on how to make ink or matches. Eventually, Tita must choose between marrying a loving, devoted doctor or saving herself for Pedro, her first true love. Her choice is revealed in a surprise last chapter.

Playful in its flirtation with magical realism and engaging in its folkloric earthiness but, nonetheless, light, romantic fare.