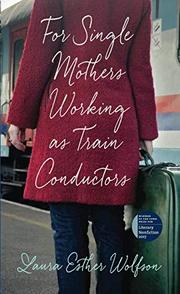 A translator’s command of language belatedly finds her translating her own life.

Wolfson describes herself as working “in a difficult-to-name genre containing generous helpings of the lived, the observed and the overheard…[and a] blurring of distinctions that had long struck me as artificial and unnecessary.” In a volume that is more cohesive than a typical essay collection, the pieces flow together like memoir, though an elliptical one, in which the author is “omitting a lot, almost everything, in fact.” Yet her writing attests to a remarkable life, one rendered with a remarkable verbal facility. She long supported herself as a translator, primarily of Russian, a language she was inspired to learn in order to read Anna Karenina. She eventually did, but her deeper connection to the language resulted from her marriage to a Russian man, whom she divorced because he resisted having children even more than she wanted them. The book’s odd title comes from her husband’s insistence that if they were to have a child, they would need “twenty-four-hour day care.” Well after she had divorced him and married again, she learned that this was actually an option in Russia, “for single mothers working as train conductors,” and thus away from home for days on end. Wolfson subsequently spent years immersing herself in the study of Yiddish as a way of coming to terms with her own identity within a family of mostly nonobservant Jews. Then she suffered a collapsed lung, caused by a disease she couldn’t pronounce. It was degenerative and usually fatal, making her pregnancy too great of a risk in her second marriage (which also collapsed). Where essayists often strain to find topics to muse about, this evocatively detailed and richly experienced writing reflects a life with no dearth of material. But as she tells an aspiring writer, “what’s important about a book is not so much what happens in it, but how the writer tells it.” Wolfson unquestionably tells it well.