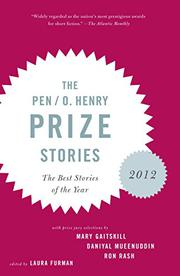 Latest edition of the annual short-fiction prize volume, of more consistently high quality than several other volumes of recent vintage.

The good news: The era of aping Ray Carver, 25 years on, seems to be over. There’s more good news: To judge by Furman’s choices, no one has figured out how to imitate David Foster Wallace, and the cutesy po-mo stuff seems to be ebbing, too. Still and all, we’re reminded of a question asked by an earnest poet not long ago: Does the American public care about anything less than poetry? Yes, and that’s the short story, the province of a tiny number of highbrow magazines and an ever-growing number of writers’ workshops, hardly read outside of those rarified circles. There’s more good news: several of Furman’s choices could turn the tide, given wider circulation. Wendell Berry’s “Nothing Living Lives Alone,” with its encouraging, manifesto-like title, is alone worth the price of admission; originally published in The Threepenny Review, it’s long and leisurely, like a winding country lane in the southern backwoods of which Berry is our greatest bard (“The town of Hargrave, charmed by its highway and motor connections to everywhere else, thought itself somewhat worldly”). The collection’s single most impressive tour de force falls just a few paragraphs shy of being a novella, that form beloved of Jim Harrison and a few other contemporary writers, and it comes from an outside-turned-insider, Beijing-born Yiyun Li, whose “Kindness” turns on a “forty-one-year-old woman living by myself, in the same one-bedroom flat where I have always lived, in a derelict building on the outskirts of Beijing that is threatened to be demolished by government-backed real estate developers.” The whole history of late 20th-century China lies in miniature in her closely written pages. Other standouts are Dagoberto Gilb’s opener, “Uncle Rock,” in which a young boy tries to comprehend the world and its summum bonum, namely baseball, and Miroslav Penkov’s Balkans morality tale “East of the West.”

Overall a strong and welcome collection, though readers on a limited anthology budget will find the annual edition of the Pushcart Prize to offer more bang for the buck.

ON WRITERS AND WRITING
by John Gardner
Newsletter sign-up