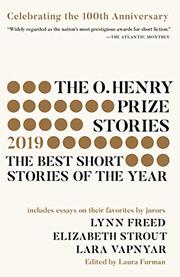 As the publisher writes, with welcome transparency, in an opening note, the choices in this volume are made by series editor and novelist/memoirist Furman (Ordinary Paradise, 1998, etc.); the jurors—in this case, Lara Vapnyar, Lynn Freed, and Elizabeth Strout—pick and comment on their favorite submission among the 20 Furman proffers. That understood, Furman appears to have broad tastes and no fear of sudden violence, something many of the stories exhibit. Perhaps the best—as with most prize volumes, especially those of limited scope, there’s not really a bad story in the bunch, but some are naturally enough better than others—is Canadian author Alexander MacLeod’s searing “Lagomorph,” whose title commemorates an unusually long-lived rabbit whose days are nearly ended by an unwonted visit outdoors and an encounter there with a hungry snake. The metaphor could be obvious in a story whose guiding arc is the deterioration of a long marriage, but MacLeod keeps his eye on the rabbit and firm control over a story packed with meaning: “I couldn’t feel anything out of place, and couldn’t tell if there was something else wrong, something broken deeper inside of him.” Speaking of control, Souvankham Thammavongsa turns the tables nicely with her story “Slingshot,” depicting a 70-year-old woman whose relationship with a 32-year-old man is sexual and sensual but whose terms she sets, quietly rebuking the noisy and nosy: “Old is a thing that happened outside,“ thinks her narrator when one bore reminds her of the age difference. The violence returns in John Edgar Wideman’s self-assured “Maps and Ledgers,” concerning a rising African American academic whose daily burden is by no means lessened when his father kills a man, while Rachel Kondo’s “Girl of Few Seasons” lays a memorable foundation for the reasons why a Vietnam-bound Hawaiian man must kill his flock of homing pigeons, “a steady heartbeat in his hands."

Essential, as always, for buffs and students of the modern short story.