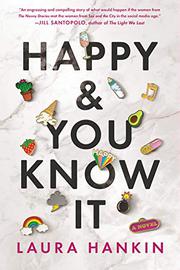 HAPPY & YOU KNOW IT

A children’s playgroup musician discovers that the glamorous, Instagram-famous moms who employ her might be hiding something.

Claire Martin is reeling after her former band found a sexy new lead singer and suddenly scored a hit song that’s inescapable. In desperate need of cash, she agrees to take a gig singing for a playgroup. She thinks she’s just there to provide a little bit of entertainment for privileged babies and their bored, wealthy moms. That’s partly true—her new employers are obsessed with Goop-style “wellness,” going on juice cleanses and trying eye-poppingly expensive new vitamins called TrueMommy. But Claire also discovers that she kind of likes these women—they’re fun, and funny, and she admires how effortlessly they seem to do it all. She grows especially close to Whitney, who maintains a mega-popular Momstagram account that reels in sponsorships, and sarcastic Amara, who used to work in late-night TV and is now struggling as a stay-at-home mom with a difficult baby. But as Claire gets to know them better, she realizes that things might not be as perfect as they look on social media—in fact, some of the moms might be hiding secrets that could destroy not only the playgroup, but their entire lives. There’s no shortage of books that deal with rich moms keeping up appearances, but Hankin manages to make overused subject matter feel fresh and vibrant. What starts out as a satire of privileged parenting quickly becomes something else entirely—a domestic thriller with twists and turns that are entirely unexpected and incredibly fun.

A dramatic and immensely entertaining page-turner about secrets, lies, and mom culture.