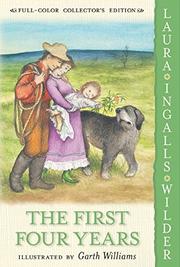 From the Little House on the Prairie series, volume 9

Laura wasn't sure about marrying Manly, she'd 'always said she'd never marry a farmer' . . . For a moment it's all wrong, this manuscript left unrevised by Mrs. Wilder, and then Manly (never 'Almanzo') takes hold, joking and reasoning and promising that they'll quit at the end of three years if he hasn't "made such a success that you are willing to keep on." Compared to its predecessors this is telegraphic, with little dialogue or development of incident; one might also say less fictionalized. and consequently closer to the bone, to the hopes for a good harvest dashed year after year. A twenty-minute hailstorm ruins the first year's work; another crop is struck by three days' hot wind and "the grains were cooked in the milk, all dried and shrunken, absolutely shriveled." But if that one good year evades them, there is recompense in a snug house and mutual sympathy; in adding New Year's at the Wilders' to Thanksgiving at the Boasts' and Christmas at the Ingalls'; in racing the ponies, sledding with Shep, the least new acquisition (once a windfall of Waverly novels); and, with little Rose sleeping or toddling close by, in plowing and haying together and seeing the stock thrive: "It would be a fight to win out in this business of farming, but strangely she felt her spirit rising for the struggle." The spirit as well as the format is that of the Little House (though the format will mislead those who expect a functional resemblance).