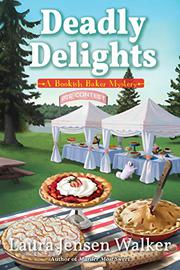 A cooking contest goes kaput when the lecherous head judge is dispatched.

Teddie St. John loves sharing her baked goods with others. So, naturally, she’s determined to win the Lake Potawatomi Bake-Off championship this year even though she also loves sharing tips with her competitors, who really put the friendly in friendly competition. But all that friendliness can’t make up for the ick factor of bake-off judge Lester Morris’ overfriendliness. Les thinks he’s Wisconsin’s answer to Paul Hollywood, but the only thing the two have in common is their age. Teddie isn’t about to let Les distract her from showing off her prize cherry pie, but she loses that choice when Les is found dead in the competition tent with Teddie’s family heirloom rolling pin conveniently by his side as the likely murder weapon. Now Teddie has to delve into Les’ yucky life to find out who else won’t miss him too much and might even be the murderer. Ably assisted by her best buds, Char Jorgensen and Sharon Hansen, Teddie resolves to get to the bottom of things immediately. Well, right after she figures out what’s been going on with her mother, who seems to be having an affair with a married man. No! Teddie and her mom have never been close, so Teddie’s got to dig in secret. This may be a case where truth is stranger than fiction.

Simple, with sweet treats like Wisconsin’s Cozy Kringle, but with a couple of neat twists.