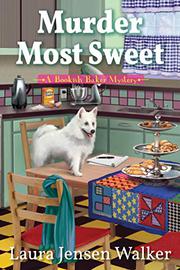 A Wisconsin mystery author is suspected of a real-life murder.

Teddie St. John is a breast cancer survivor who chose to get a double mastectomy, much to her mother’s dismay. She’s also a fantastic baker, a caring friend, a super mom to her American Eskimo rescue, Gracie, and a published mystery writer. When bestselling author Tavish Bentley comes to Lake Potawatomi for a book signing, Teddie joins the crowd and finds herself immediately attracted to the charming Englishman. Although her scarf is stolen and used to strangle Bentley’s recently dumped fiancee, Teddie’s not a serious suspect for Sheriff Brady Wells, who’s known Teddie forever but still has to question her. It turns out that Tavish has a stalker problem in Annabelle Cooke, a determined woman who creates a nasty scene while Tavish and Teddie are dining at a local restaurant. She’s removed from the suspect list when she too is found strangled with one of Teddie’s many scarves. The town rumor mill has Teddie pegged as a serial killer, and her neighbors post their ideas all over social media, but it worries her more that her publishers are nervous about the publicity. Using their varied skills, Teddie and her two best friends start sleuthing on their own as she pursues her relationship with Tavish, who seems a perfect fit for her. Tavish’s own problems, including an ex-wife, give them plenty of suspects to investigate.

A wryly amusing cozy debut lent credence by the author’s own experience as a cancer survivor.