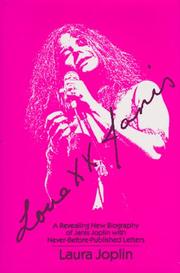 Joplin pens a bio of her legendary older sister that's more detailed and evenhanded, yet much less dramatic and emotionally raw, than Myra Friedman's bestselling Buried Alive (1973)—and includes the rock star's unpublished letters home, more revealing for Janis's aren't-you-proud-of-me? eagerness of tone than for their contents. Describing Janis's early life and influences, especially the high cultural and educational ideals of her parents, Joplin sometimes employs a tone of stuffy propriety that seems decidedly strange—after all, this is Janis Joplin she's describing. Getting into Janis's years at the Univ. of Texas, however, Joplin rises to the task. She debunks the tale that Janis was voted ``Ugly Man on Campus'' (she was nominated by friends, not detractors, and she didn't win). But Janis was plenty tormented and complex, and we get the impression that her life would have been all booze and unfocused angry rebellion and squalor if it hadn't been for Ken Threadgill, the Austin barkeep who recognized her extraordinary musical gifts and launched her career. Once in San Francisco, Janis teamed up with a ragged, soulful band called ``Big Brother and the Holding Company,'' and all her untamable demons channelled into her art. Her performances were electric. One West Coast critic called Janis a ``shaman woman,'' and Janis didn't disagree: ``I do believe in some very amorphous things that happen when you're onstage...like something moves in the air.'' At once narcissistic and sensitive, hard-driven and childlike, the Janis that emerges here was trapped by her ``get it while you can'' image—and she apparently thought heroin oblivion was her only way out. A thorough, restrained account of an extraordinary rise and fall. (Thirty-two pages of b&w photographs—not seen.)