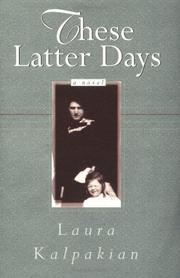 From 1889 to the 1940s with Mormon households in Utah, Idaho, and California--as Kalpakian (Beggars and Choosers) rolls out sharp-edged characters and smartly crackling dialogue. Ruth Mason--six feet tall, ""well past the bud""--peers dismally into her likely future as a spinster in the drear home of her taxidermist father, relentlessly feeble mother, and younger siblings. So Ruth decides that she might as well marry Samuel Douglass, a pious Mormon homesteader in the Mormon community of Healy, Idaho, who has come to Salt Lake for ""supplies and a wife."" The result? Independent, tough-minded Ruth soon finds herself living in a dugout and skinning rabbits, all ""degradation and thankless servitude"" among rather dirty and uncouth Saints. Then come six children, each birth more terrible than the last, the last two babies the result of marital rape--as Ruth, her iron hatred honed to steely determination, escapes with her children, home to Salt Lake in a wagon. There, her father now dead, Ruth seeks help from her brother Albert--who ships the family off to St. Elmo, California, under the stuffshirted wing of sister Lily's banker-husband. And it's in St. Elmo that whip-tongued Ruth--a doubting but practicing Mormon--falls in love with Dr. Luther Tipton, wry atheist and cynical realist (with a fondness for Burning Bush whiskey). But, since husband Samuel is still alive somewhere (now a wild-eyed ""prophet"" who defies Mormon reforms), Dr. Tipton remains only a perennial Sunday dinner-guest--while Ruth buys a cafe and watches her offspring grow into reverence, irreverence, and/or freedom. . . until the final violent confrontation with the horrid, reappearing Samuel. All in all: the best of the several recent Mormon novels, with bootstrap adventure, brightly vigorous characters, and a richly complicated heroine in Ruth--who both reveres and detests marriage, who is a paradox formed by ""education but no imagination.