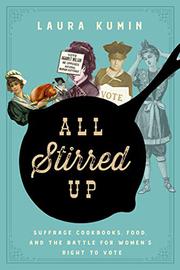 Suffrage Cookbooks, Food, and the Battle for Women's Right To Vote

Part cookbook and part spirited history lesson, this book examines a little-known aspect of the women's suffrage movement of the late 19th and early 20th centuries.

Among the many techniques used by American suffragists to persuade voters was the production and distribution of “suffrage cookbooks” with titles such as Little Tastes of Enfranchisement. Kumin, a former Washington, D.C., attorney who now teaches cooking and food history, makes a case for the importance of “mainstream” suffragists, who often play second fiddle to their more colorful “militant” sisters in history books. The author opens with an extensive timeline of the history of the suffrage movement in the U.S., including not just noteworthy political events, but such culinary landmarks as the invention of the Moon Pie (1917) and the opening of the first A&W root beer stand (1919). Kumin intersperses the history of the movement with sizable collections of recipes in categories such as “Breads, Breakfast, and Brunch” and “Condiments, Pickles, and Preserves.” For each recipe, the author provides the original and a modern reinterpretation, often tossing in more vegetables and seasonings and including more detailed instructions. Some readers might complain that the portion of the book devoted to analysis of significant cookbooks and booklets and their roles in the suffrage movement is relatively small compared to the pages devoted to rehashing others' studies of the movement as a whole—not to mention that many of the recipes are comparable to others of the day. However, it’s difficult to question the author’s enthusiasm and impossible to resist the kind of historical tidbits that pop up frequently along the way—e.g., novelist Jack London's recipe for stuffed celery, which he suggests is “a very appropriate prelude to a dinner of roast duck.”