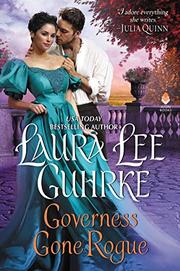 A ruined lady dresses as a man to be hired as a tutor and falls in love with her employer and his two sons—but her past casts a long shadow.

Before being notoriously seduced and maligned by an aristocrat, Amanda Leighton loved being a teacher. Unable to find another position, she is piqued to hear a nobleman claim that “no woman can prepare a boy for Harrow and Cambridge.” Desperate, she disguises herself as a man to apply to tutor the gentleman’s infamously naughty twin sons despite the unwritten rule that “women, alas, could not be tutors, not to boys. It wasn’t done.” Amanda, as “Mr. Seton,” soon has the boys settled into a routine and engaged in her lively lessons, but it’s not too long before their father, Jamie, realizes she’s a woman. The boys are already attached to her, though, and convince him to let her stay as their governess “Miss Seton.” Jamie and Amanda are attracted to each other, but Amanda realizes her sordid past would threaten his position as a Member of Parliament. She also believes he’s still devoted to his dead wife. Jamie knows Amanda has suffered unwelcome attention from previous employers, plus he’s acutely aware that Amanda has brought order and joy to his household, so he doesn’t want to jeopardize the status quo despite his growing feelings. However, when Amanda’s past threatens everyone’s happiness, it forces Jamie and the boys to clarify their feelings and stand up for her in unexpected, heartwarming ways. Guhrke continues her delightful Lady Truelove series with similar charm, creating another irrepressible heroine and making another nod to the frightful historical disparity between women’s and men’s freedoms but adding two adorable kids and a gentleman who needs to be reminded of what’s important—à la Mary Poppins—to the mix.